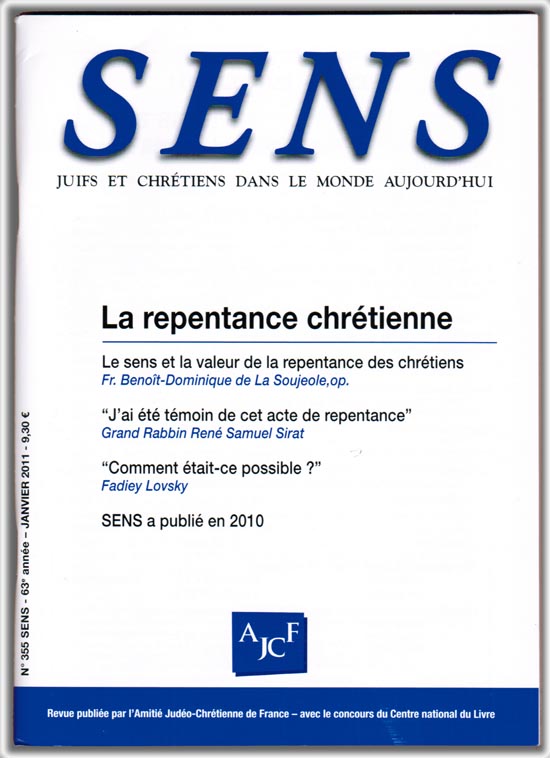 Three articles of this issue are devoted to the theme of “Christian repentance”. Fr. de La Soujeole gives a lecture on “the meaning and the value of Christian repentance” and analyses both the theological grounds of showing repentance and the way Pope John-Paul II’s understood it (both during the ceremony of repentance in Rome and during the 2000 Jubilee when he travelled in Israel). Chief Rabbi Sirat was a member of the Jewish delegation at the negotiations in Geneva on the Auschwit Carmel. He was present at the Kotel (Western Wall) when the Pope was nearby, and gives an account of the moment. Fadiey Lovsky offers a meditation on the difficulty and the necessity of repentance. The three texts help to deepen the signification of showing repentance from a spiritual perspective. They also help to understand its urgency.

Additionally, the review salutes the publication of the new TOB and the consideration it had for the suggestions given by the AJCF [see Sens, 2004 n° 1/2]. It also proposes a reflection on present German cinema and the way it processes the period of the Holocaust. Olivier Rota reports on the annual symposium of the International Council of Christians and Jews that was held in Istanbul in June 2010. A set of reviews of books on Israel and Islam concludes this issue.