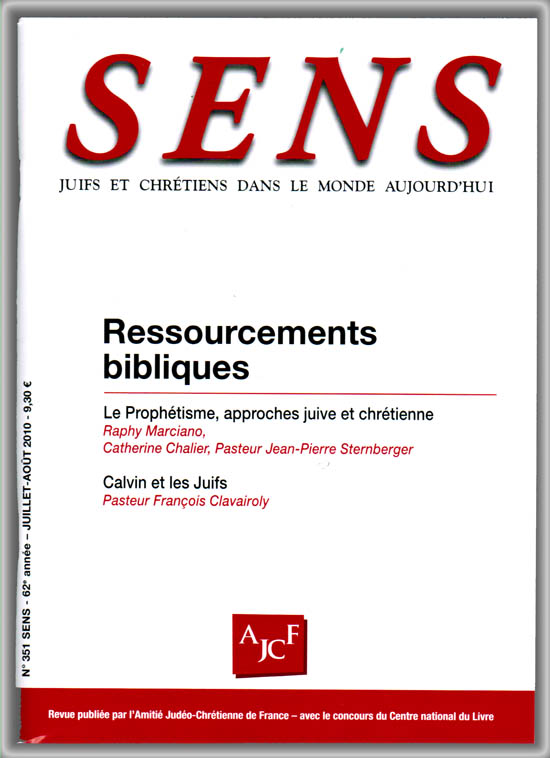 The French Jewish-Christian Friendship Association has programmed the study of the theme “Biblical Prophecy : Jewish and Christian approaches” for its General Assembly of June, 2009. This issue publishes the two lectures : from Catherine Chalier (“Singularity of the Biblical Prophecy”) and the Reverend Jean-Pierre Sternberger (“Biblical Prophecy, a Christian Approach”). The first one analyses what is the Jewish approach of Prophecy, and stresses its complementarity with the Law instead of its opposition ; the second one studies the ways the New Testament looks at some figures of Prophets met in the First Testament.

This issue also publishes a lecture from Reverend François Clavairoly to the National Council of the Association in November, 2009. The lecture, entitled “Calvin and the Jews”, studies the attitude of the Genevan reformer towards the First Testament, and highlights both the background of its attitude and its ecclesial project. Excerpts of the debate that followed this lecture are proposed to the reader.

This issue is completed by two reactions to current events. First, the review gives an avenue of analysis to the document “Kairos Palestine 2009”, largely unilateral, on the situation of Christians in Middle East. Secondly, the review goes back over “the Paris Cathedral Affair” and the public censorship some Catholic Ultra-Traditionalists used against Rabbi Rivon Krygier.