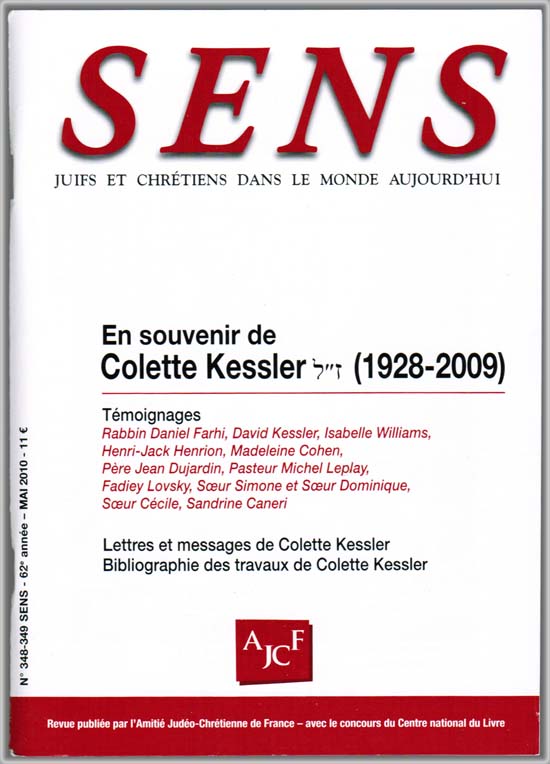 Colette Kessler, who served for twenty-five years as vice-president of the Amitié judéo-chrétienne de France, passed away on May 3rd, 2009. This issue is dedicated to her, marking the first anniversary of her death. It contains testimonials from colleagues who knew her and worked with her, in particular in the Liberal Judaism Movement of France (where she was for many years the director of the Talmud Torah), as well as a certain number of previously unpublished documents (i.e. letters and interviews). This material is rounded out by the list of her publications, essays and articles, which demonstrates the diversity of her interests and the depth of her thought processes. Her role in the positive development of Christian-Jewish dialogue in France is thus emphatically underlined, as is her exceptional ability to communicate and to have impact. Of particular note is the quality of her dialogue with Catholic and Protestant monastic communities – a sector rarely visited. As the director of the Amitié judéo-chrétienne de France says in his introduction, “May this bouquet of testimonials cause her to be long remembered and to be a source of spiritual inspiration for present and future generations.”

This issue also contains an article on the anachronistic use of the name “Palestine” in catechism manuals and in New Testament exegesis. It cites as example the recent publication of the French translation of the four volumes of John P. Meier’s book on Jesus, Un certain Juif Jésus. Les données de l’histoire (Éditions du Cerf, 2005-2009).