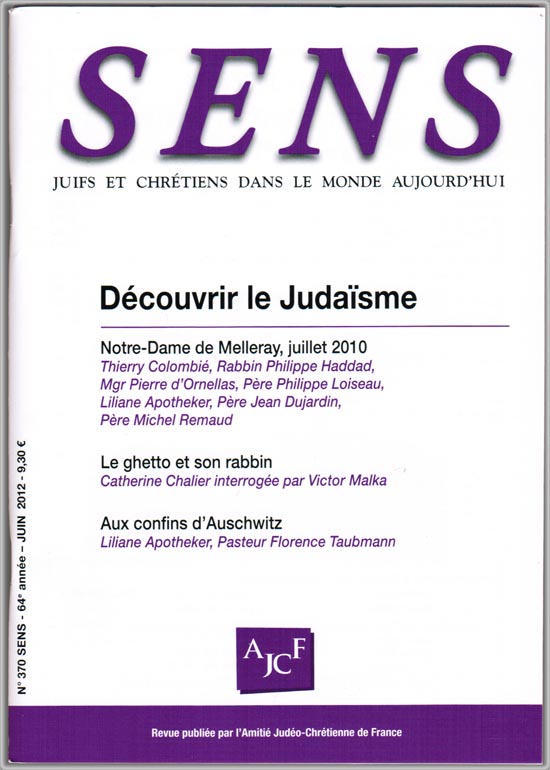 A five-day session entitled "Discovering Judaism, Christians to listen" was held at the Abbaye Notre-Dame de Melleray in July 2010. It was organized by a group of Christian active members of both the AJCF and the Diocesan Service for Relations with Judaism (SDRJ) of the four dioceses of the West : Nantes, Angers, Rennes and Saint-Brieuc. The gathering proved a great moment of sharing and friendship (cf. Sens, No. 354 , Dec. 2010, p. 811-820).

Every lecture that took place during those days was recorded. On the eve of a second event of this type, this time at La Hublais in the diocese of Rennes, in July 2012, Sens publishes the most significant texts. A lecture of Rabbi Philip Haddad for "Introducing the Book of Psalms," one of Father Philippe Loiseau and Liliane Apotheker on the Sabbath, one of Father Jean Dujardin and Father Michel Remaud who have been asked the same question : "Does the Jewish ’no’ to Jesus as the Messiah have a positive value for the Church ?" This series of lectures is concluded by a brief but eventful speech of Bishop Pierre d’Ornellas, Archbishop of Rennes, on "The Mystery of the election" and his homily at the Saturday Mass, and the homily of Father Michel Remaud at the Sunday Mass.

In addition, the review offers a transcript of a France Culture broadcast, during which Victor Malka asked Catherine Chalier on his latest book : Kalonymus Shapiro, Rabbi of the Warsaw Ghetto. In French : summary