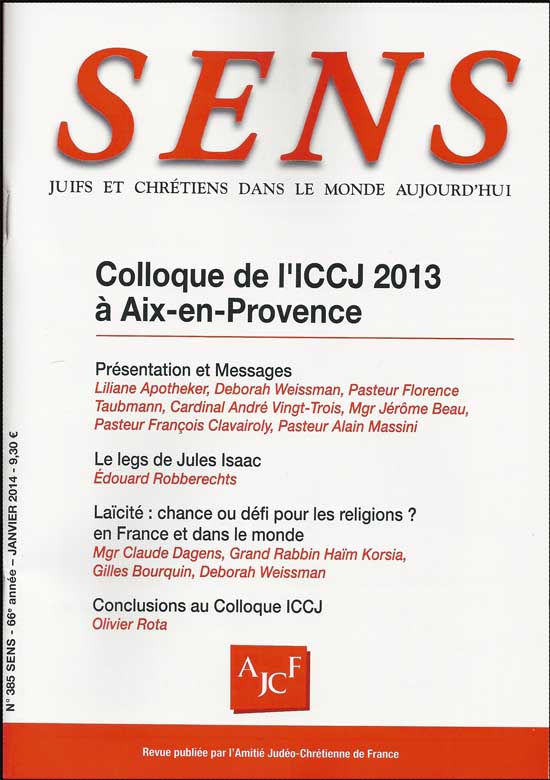 It is the first issue which incorporates the main interventions of the Conference of the ICCJ held in Aix-en-Provence in July 2013.
Lectures have already been published on this website, but it is always valuable to see them collected in the same issue.
The reason for the holding of the ICCJ in Aix in 2013 came that we all want to celebrate the 50th anniversary of the death of Jules Isaac in his own city of adoption.
Edouard Robberechts, through his lecture, the legacy of Jules Isaac, made a particularly original and relevant second reading of Jesus and Israel that he perceives as a cry addressed to Christians with a fundamental ethical requirement.
The topic of the session was devoted to secularism, with the following problem : opportunity or challenge to religions ? in France and in the world, with the interventions of Bishop Claude Dagens, Chief Rabbi Haim Korsia, Gilles Bourquin, and Deborah Weissman, President of the ICCJ.
A second issue of Sens, in a few months, will be devoted to the round table whose topic was the question of the blasphemy, with three speakers : Jew, Christian and Muslim.

ICCJ Aix 2013 : some lectures (papers or videos) in English on ICCJ website