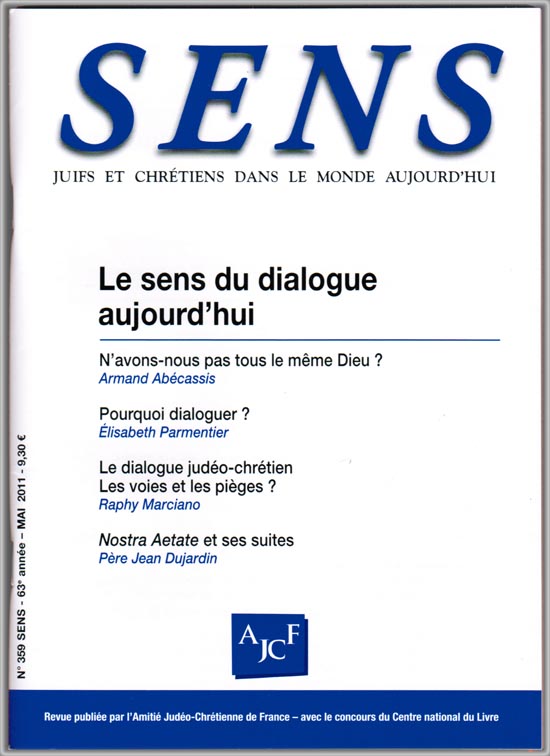 Why dialogue ? with whom and for what purpose ? Which attitude to adopt ? These are some questions that are asked by all the articles gathered in this issue. Armand Abécassis insists on the enrichment his meeting with Christians provided him and advocates for the deepening of a careful approach to one another. Elisabeth Parmentier, sharing her experience in the Reformed Church, shows that dialogue is a not a path that leads to the disappearance of the partner, but to peaceful relations between partners. Raphy Marciano first underlines the huge progress in the dialogue between Christians and Jews since the last war. He then analyzes the implications of mutual recognition and religious coexistence. Finally, Father Jean Dujardin, referring to Nostra Aetate and its aftermath, wonders about the reception of this text and the tasks that are still to be undertaken.

In its second part, the review welcomes the publication of the New TOB (Ecumenical Translation of the Bible), an updated version (in line with the concerns that were expressed by the Jewish-Christian Friendship of France) and supplemented by a variety of texts belonging to the Orthodox Tradition. However, Sens publishes an article by Father Jean Massonnet which reports that one of these texts, the fourth book of Ezra, calls for reflection as it is inspired by a theology out of date (at least in its first chapter).