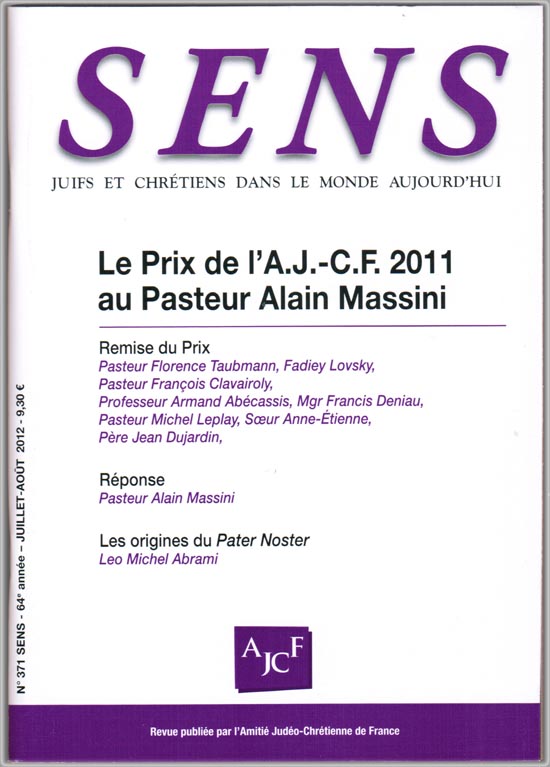 On October 24, 2011, at the Temple of the Holy Spirit in Paris, the AJCF awarded its annual Prize to Pastor Alain Massini. He is one of the architects of the Leuenberg statement "Church and Israel" (2001), adopted by the Community of Protestant Churches in Europe.
Pastor Florence Taubman, Professor Fadiey Lovski, Pastor Francis Clavairoly, Professor Armand Abecassis, Bishop Francis Deniau (Bishop of Nevers), Pastor Michel Leplay, Sister Anne Stephen and Father Jean Dujardin successively honoured him. Their speeches and testimonials are published here.
In his extensive response, Pastor Massini, after retracing its path, focused on highlighting "the contribution of Leuenberg Church Fellowship", in "pointing out some issues of dialogue to which this document calls Jews and Christians" and in showing the originality of the document and what it offers.
In addition, the review publishes the Intercessory prayer in the form of lament on Psalm 91 that Pastor Alain Blancy composed and read for the 50th anniversary (October 2000) of the establishment of the Cimade at camp Gurs (where he himself was sent) ; and Leo Michel Abrami’s analysis on the [Jewish] Origins of the Pater Noster.