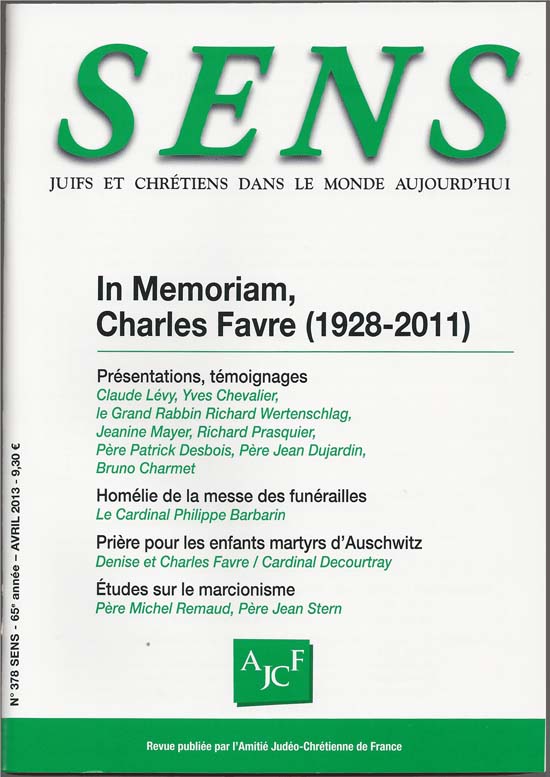 Charles Favre (M.D.) was active at local, national and international levels in the French Amitié Judéo-Chrétienne since the 60s. He was one of the Vice-Presidents of the AJCF from 1979 to 2008, before his death on December 22, 2011.
Sens wanted to pay a tribute to Charles Favre. This issue publishes testimonies from people who knew and worked with him. One can found here : the homily delivered at the funeral by Cardinal Barbarin on December 26, 2011 ; the speech that Chief Rabbi Richard Wertenschlag read at the ceremony organized at the synagogue in Lyon on January 22, 2012 ; testimonies from Claude Lévy (current president of the AJC section of Lyon), Jacqueline Mayer, Yves Chevalier, Dr. Richard Prasquier, Fr. Patrick Desbois and Fr. Jean Dujardin ... Some bibliographical notes were compiled by Bruno Charmet.
A text was given to the review by Jacqueline Favre. Called “prayer for the child martyrs of Auschwitz”, it was written by Denise and Charles Favre. It was also endorsed by Cardinal Decourtray.
The "Studies" section of the review gathers two texts on Marcionism and neo-Marcionism : one from Fr. Michel Remaud and another one from Fr. Jean Stern.
The "Books" section opens with a review of the latest book written by Gerard Israel. It is devoted to the Shadow of Marcion (Payot publishing, 2012).