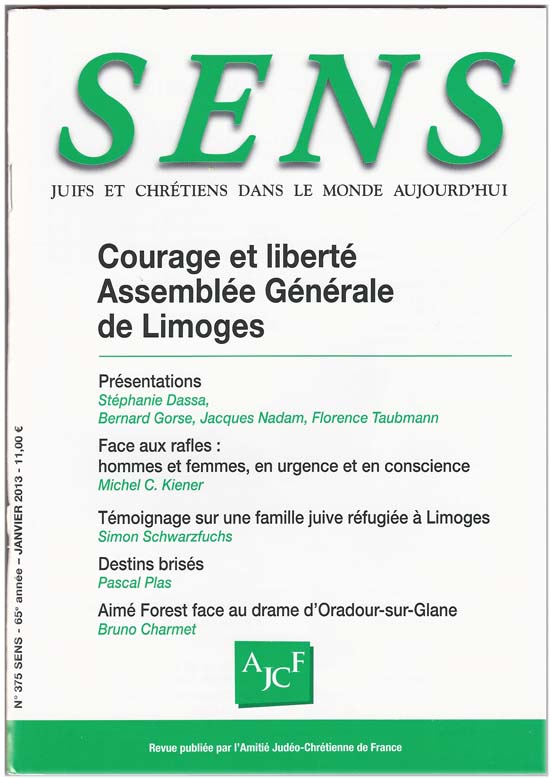 In May 2012, the association held his General Assembly in Limoges and Ouradour-sur-Glane on the theme : « Courage and freedom ».

After several presentations – mostly from the Jewish, Protestant and Catholic communities of Limoges – and a short Biblical teaching of Florence Taubmann on « Ruth The Moabite’s Courage », this issue publishes four lectures read at the Centre de la Mémoire d’Oradour-sur-Glane : a study from Michel G. Kiener, historian, on the reaction of men and women from Limousin in front of roundups of Jews and their persecutions ; the testimony of Simon Schwarzfuchs, Israeli historian, who took refuge in Limoges between 1940 and 1944 ; an analysis by Pascal Plas, historian and head of the Centre de la Mémoire d’Oradour-sur-Glane, of two young teachers, Denise Bardet and Odette Couty, that died in Oradour on the 10th of June, 1944 ; a study from Bruno Charmet on the philosophical and spiritual trajectory of Aimé Forest, native of Limousin, and on the drama he lived during the Oradour slaughter (22 members of his family perished then).

The "review of books" focuses on Michel Kiener’s, Pascal Plas’ and Simon Schwarzfuchs’s publications on Jews that took refuge in Limoges and the organization of their rescue. It also presents the last issue of Kountrass (French review in Jerusalem) on the "spiritual resistance [of Orthodox Jews] in France during the Holocaust”.
In French : summary