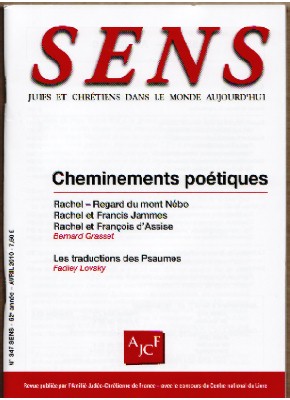 This issue is devoted to the poet Rachel (Blaustein) who, during the first half of the twentieth century, invented a new form of Hebrew poetry which was at once biblical and modern. She was born in Russia in 1890, left for Palestine in 1909, spent the First World War in Toulouse and then in Russia, returned to Palestine in 1919 and died there in 1931 at the age of forty-one. She is presented here by her French translator, Bernard Grasset, who examines her affinities with Francis Jammes and with Francis of Assisi. He offers a selection of her poems and articles translated into French, as well as her translation into Hebrew (side by side with the French texts) of three poems by Francis Jammes. For Grasset, Rachel’s 1929 article on Francis of Assisi manifests an openness and a desire for understanding which go beyond religious differences. The section continues with the text of an address by Fadiey Lovsky in which he presents “Efforts at translation of the Psalms into French in the sixteenth, seventeenth and eighteenth centuries”.

The issue begins with an account by Liliane Apotheker of the visit of Pope Benedict XVI to the Synagogue of Rome at which she was present. Another section deals with the signature by Benedict of a document decreeing the “heroic virtues” of Pius XII, and includes the reactions of Armand Abécassis, Liliane Apotheker and Florence Taubmann to what they consider an inopportune decision. As well, Étienne Fouilloux, writing as a historian, considers the general question of the canonization of popes and in particular that of Pius XII.