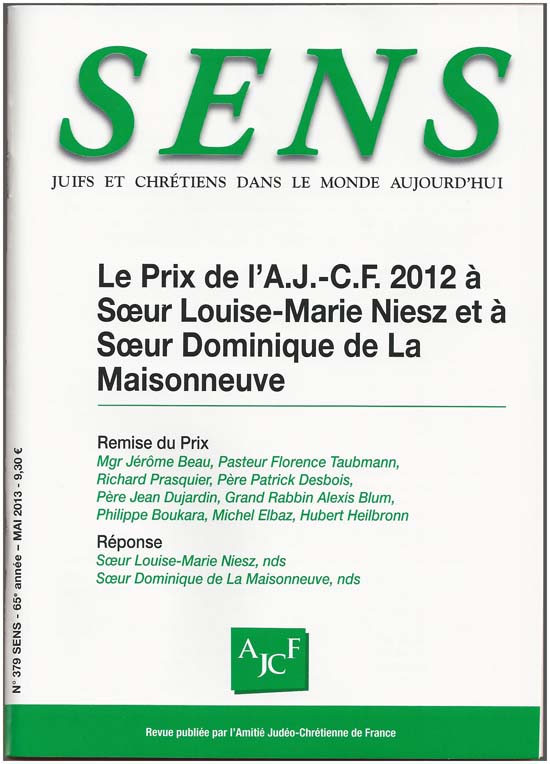 The annual AJCF Prize was given this year on Oct. 15, 2012 in the beautiful surroundings of the large auditorium of the Collège des Bernardins, Paris. Sr Louise-Marie Niesz and Sr Dominique de La Maisonneuve (NDS) have been honored for their work in favor of reconciliation between Jews and Christians and their animation of the SIDIC of Paris (Service Information-Documentation Juifs et Chrétiens).
This issue publishes the lectures given at this evening. After an opening address from Bishop Jérôme Beau (head of the Collège des Bernardins), Florence Taubmann (head of the AJCF) presented the Prize recipients and read a few congratulatory messages received at the headquarters of the association. Then several friends gave a recollection of their common past : Dr. Richard Prasquier, Fathers Patrick Desbois and Jean Dujardin, Rabbi Alexis Blum, Philippe Bokhara, Michel Elbaz and Hubert Heilbronn.
In response, Sisters Marie-Louise Niesz and Dominique de La Maisonneuve explained the reasons and meaning of their commitment, and their hopes for the future. A bibliography of each sister complete this set.
The review also publishes, under the "Tribune" headline, two texts of reflection : one of Father Antoine Guggenheim on "Blasphemy, a religious act" and the other by Pierre-Henri d’Argenson on "Can the precept ‘love your enemies’ establish a political action ? "