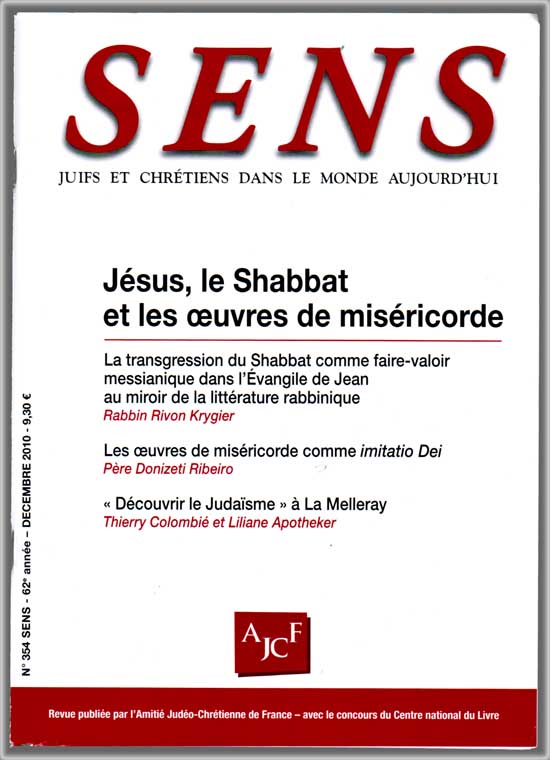 The teaching of Jesus was rooted in a Jewish tradition prior to his lifetime, whereas the writing down of this tradition took place well after him. This fact was ignored for a long time, and only discovered lately. It enriches the understanding we have of some passages of the New Testament. Two examples of studies are published in this issue. Rabbi Rivon Krygier uses the rabbinic literature to understand the healing of the paralytic of Bethesda on Shabbat, and the background of its justification given by John 5:17-18. The author shows how Jesus expressed a messianic claim. Fr. Donizeti Rebeiro shows that the concept of “works of mercy” (explicit in the scene of the final judgment in Mathew 25:31-46) goes back to a tradition witnessed in the targumim and some texts from the Tannaim.

The review also reports two Jewish-Christian events of great importance. First, the gift of a Sefer Torah, given by a Christian to the Jewish community of Clermond-Ferrand, on the 14th of May, 2010. Second, the five days of “Discovering Judaism” (13-18 July, 2010), organized by the Diocesan Services for the relation with Judaism in the Dioceses of the West (Nantes, Rennes, Angers) and some Christian members of the AJC, that took place at La Melleray Abbey, Loire-Atlantique, where an average of 180 people per day gathered and had a rewarding experience of dialogue.