February 2010 – Felix Mendelssohn in the stresses of history 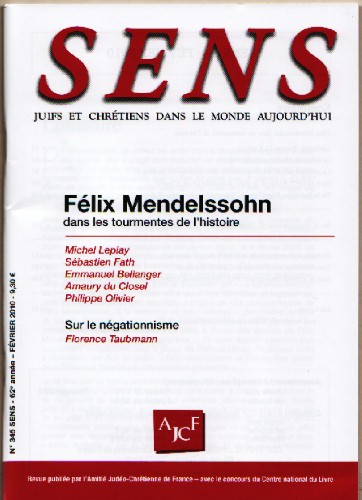 In February 2009, under the auspices of the Association universitaire et artistique de Neuilly-sur-Seine, a Franco-German colloquium was held to mark the bicentenary of the composer’s birth, with the title “The Mendelssohn family, an ecumenical saga in the stresses of history”. This issue offers three major contributions to the colloquium : one by Sébastien Fath, a specialist in the sociology of religions, entitled “Mendelssohn the Lutheran” ; another by Emmanuel Bellanger, professor at the Institut catholique de Paris and organist of Saint-Honoré-d’Eylau, entitled “Felix Mendelssohn’s sacred music, at the meeting-ground of two cultures” ; and the third by Amaury du Closel, orchestra conductor and director of a forum called Voix Étouffées (choked voices), entitled “Facing the Third Reich : the Assassinated Muse”, dealing with the banning of Felix Mendelssohn’s music under National Socialism. There is in addition the text of an address by Philippe Olivier, visiting professor at the Academy of Arts of Berlin, on the reception of Felix Mendelssohn in France : “From the Third Republic to the German Occupation”.

Among the other titles in this issue, of particular note is the text of an address by Florence Taubmann, a minister in the Reformed Church and the president of the Amitié Judéo-Chrétienne de France. Under the title “On Negationism”, she sets out the obligations of Christians today : a commitment to teaching, a revitalization of preaching and, for those who feel called to do so, a watchful protectiveness with regard to the memory of the Shoah.