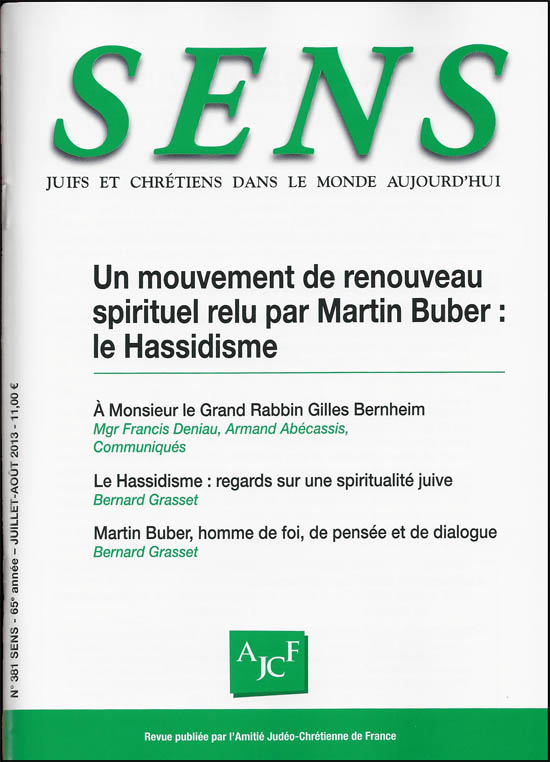 In the version that appears in the eighteenth century in Eastern Europe, Hasidism is a movement of spiritual renaissance that is organized around the head of the community (the Tzaddik or Rebbe), his education and the relationship between master and disciples. Bernard Grasset, who says he discovered Hasidism through Martin Buber, proposes two texts. The first one, rewritten from a lecture held at the AJC Group of Vendée, offers a six-point analysis of what is the thought and spirituality of Hasidism. The second one presents Martin Buber’s thinking and focuses on four aspects : “Bible, Judaism and Christianity”, “Philosophy and the human condition”, “Spirit and Mystery” and “Love and dialogue”. Using numerous quotations from the work of Buber, he tries to understand what makes the originality of Hasidism and shows how Buber certainly drew his inspiration to build his own dialogical philosophy.
The introduction of the issue offers two ways of thinking (one of Bishop Francis Deniau and one of Professor Armand Abecassis) about the so-called “Bernheim case”. The two men, voicing their sadness about what might appear as a mediatic bashing, express the hope that Gilles Bernheim may be able to resume his works of transmission of an authentic Judaism, and of a demanding dialogue with Christianity.
In addition, Anne-Marie Baron provides us with a long presentation of Margarethe von Trotta’s movie on “Hannah Arendt”. She notes that she “chose to focus on four tumultuous years during which she has devoted herself to the Eichmann trial” instead of a “comprehensive biography of the philosopher”. “Avoiding the linearity of a classic story [she] reconstructs her life through clever narrative tricks”. In particular Anne-Marie Baron discusses how the film deals with the concept of “banality of evil” and the issue of “Judenräte”.