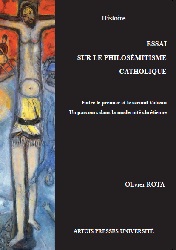 It is with pleasure that we present to you, and recommend, the publication that has flowed from his thesis, An Essay on Catholic Philosemitism, by Olivier Rota.

From the book’s cover blurb : "A century separates the First Vatican Council (1869) from the Second (1962-1965). This was a period of paradigmatic renewal for the Catholic Church, and it was also a century of the reformulation of Jewish-Christian relations. We ought to see the synchronicity of these two phenomena as more than merely a coincidence.

The specific conditions of both Jewish and Christian life were changed by their entry into modernity, eventually leading to profound changes in the relationship woven between Jews and Chrsitians. This was a challenge posed to the Catholic Church and to Jews, independently of each other : modernity can, in fact, be found at the heart of the new relational dynamics which Christians and Jews have been weaving in the wake of the French Revolution and the opening-up of the European ghettos.

Modernity is about humanity finding its way back to itself and was, at its origins, a general movement of becoming-aware of oneself. Attentive to the fact that the renewal of Catholic discourse about Jews has taken place within the framework provided by modernity, we are defending the following proposition : it has been the tumult of modernity that has given birth to a new understanding of the relationship between Catholics and Jews. Only the conditions of modern life have been able to break the circular and self-referential logic of the Church’s anti-Jewish tradition."

Prior to his doctorate in Religious Studies, Olivier Rota received a Masters in History. He currently works at the University of Arras, especially for the IEFR. He has been for several years an active member of the Jewish-Christian Friendship Association of France in Lille, and, since June 2011, he has been a member of the National Executive Committee of the Jewish-Christian Friendship Association of France. He is also involved in Sens, the AJCF’s journal.