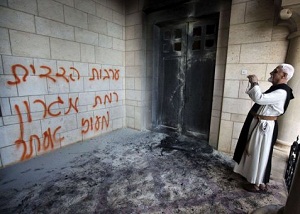 In the early hours of the morning on Tuesday, Sept. 4th, 2012, the Trappist monastery in Latrun was vandalized and anti-Christian graffiti were sprayed on the walls. This appears to be again the work of the extremist Jews who call their actions "the price tag." Our Israeli member orgainization has issued the folloiwng press release :

"On behalf of the Interreligious Coordinating Council in Israel (ICCI) and the Jerusalem Center for Jewish Christian Relations, we denounce the attack on the Latrun monastery. This is a hillul hashem, a desecration of the name of God.

As people who seek peaceful coexistence for Jews, Christians and Muslims in this land, we condemn such wanton acts of violence against people of other religions in our country. At the same time, we rededicate ourselves to educating for tolerance and mutual understanding which can increase the possibility of living together in peace and harmony in this land."

The Council of Religious Institutions of the Holy Land condemns the acts of vandalism of the Latrun monastery near Jerusalem this morning. The Council calls upon people from all faiths – Christians, Jews and Muslims – to respect all Holy Places and sites for all three religions, and strongly deplores extremist behaviour that exploits or involves religion in a political/territorial dispute.

In the name of the Chief Rabbinate of Israel, The Ministry of Waqf and Religious Affairs at the PA and The Heads of the Local Churches of the Holy Land,

The Council of Religious Institutions of the Holy Land
http://www.crihl.org/