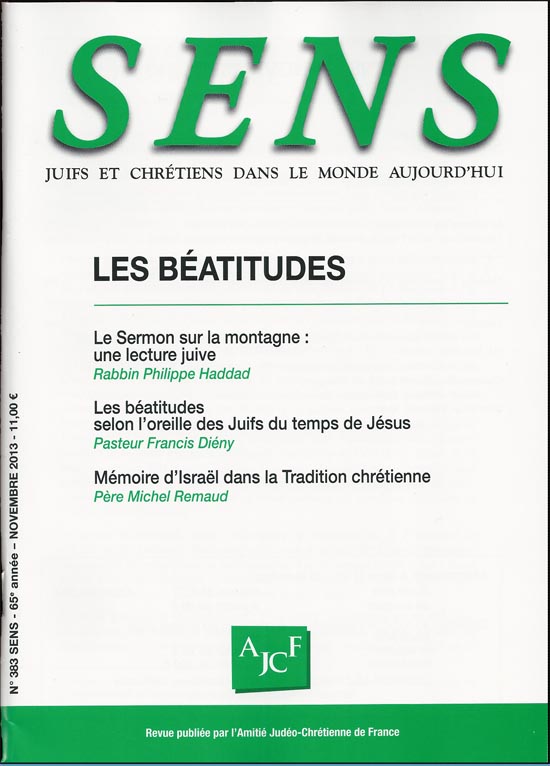 This issue contains two long articles that complement one another.

The first article, signed by Rabbi Philip Haddad, The Sermon on the Mount : a Jewish reading, is an analysis of and a commentary on various passages of chapters 5 and 6 of the Gospel of Matthew. Rabbi Haddad focuses on "The Beatitudes" (5,1-10) , the "six antitheses" (5,17-48) , "Our Father" (6,9-13) and the need to "abandon oneself to the Divine Providence" (6,25-34). Bringing the Gospels to parallels texts in the Jewish tradition, it shows both the continuity of the teaching of Jesus in relation to the teaching of Rabbis, and the fundamental splitting element, i.e. the type of "authority" to which Jews and Christians call.

The second article, The Beatitudes according to the ear of the Jews in Jesus’ Time, was written by Pastor Francis Diény. Based on his knowledge of the Tradition of Israel, the author highlights what Jesus’ listeners could hear and understand from the Beatitudes, as they were phrased by Jesus. The article shows that the seven Beatitudes (or eight - but for him, the last one only doubles the fourth) are rooted in the experience of Israel and echo the Word of God.

This issue also publishes a short article by Michel Remaud where he shows how the New Testament can be a source of information on Judaism itself, its practices and methods of interpretation.

Finally, in the "Books" section, one can mostly find the review of the book by Jean Massonnet, The sources of Christianity : the Pharisaic concept of revelation.